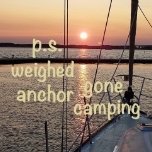 By Paul and Santina,
July 28 in Delivery Day Photos