The Channeled Scablands Part 3 of 4 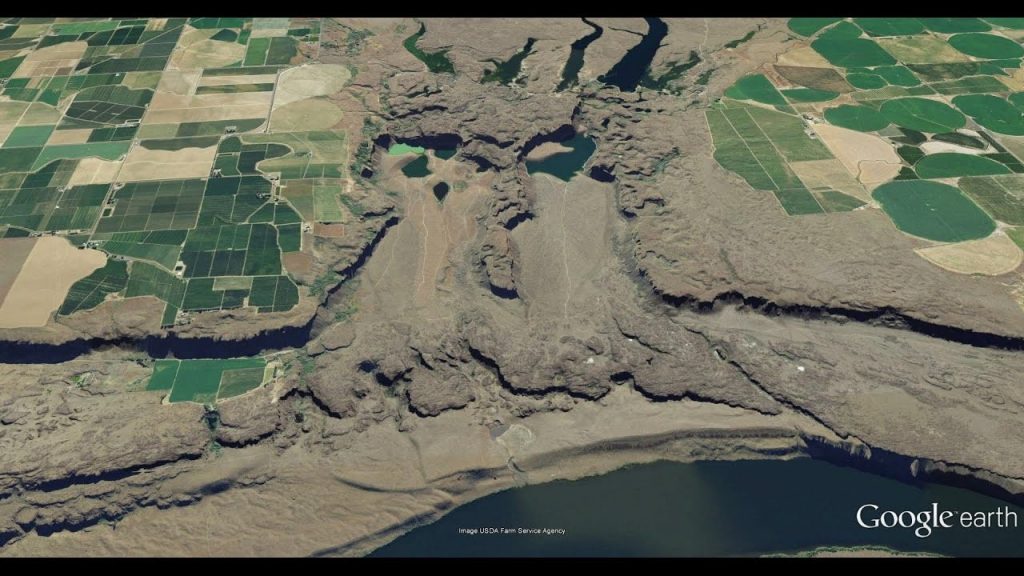 Pothole Coulee, one of the more dramatic Channeled Scabland features that helps illustrate how massive this Ice Age Flood was and how terrifyingly destructive it became as it traveled to the Columbia River. What you see is the basalt bedrock that remained after the scouring effects of the Flood.

The Coulee is about five miles wide at its widest. The farmlands above are approximately one thousand feet above the Columbia River below. To quote J Harlen Brentz, (The geologist that spent nearly forty years attempting to convince other geologists of his time that the Scablands were flood caused.) the two coulees are separated by “a great blade of rock a mile and half long, 1000 feet wide and 375 feet in maximum height.”
The farmland above the coulee on the left side of the picture is known as Babcock Ridge. The farmland on the right side is known Evergreen Ridge. The four, long, finger-like lakes at the top of the photo are called Quincy Lakes. The three smaller lakes down in the Babcock Coulee side are what is known as plunge pools, which were caused by the scouring turbulence of the Ice Age Flood as it overtopped the above ridge.

I drove to the Coulee on the Babcock Ridge side. It can only be partially seen because of the shadow of the cliff above but there is a gravel road that comes in on the Babcock Ridge side at the lower Bench. The white area to the right of the Bench is the parking area for the entrance for hiking into the Coulee. What can be well seen is the walk paths that are in the coulee. They were not developed by the State of Washington; they were created by many walking feet over many years.

According to guide books it is approximately five miles to the larger plunge pool lake from the entry gate. This will help give some sense of scale to the lower coulee. 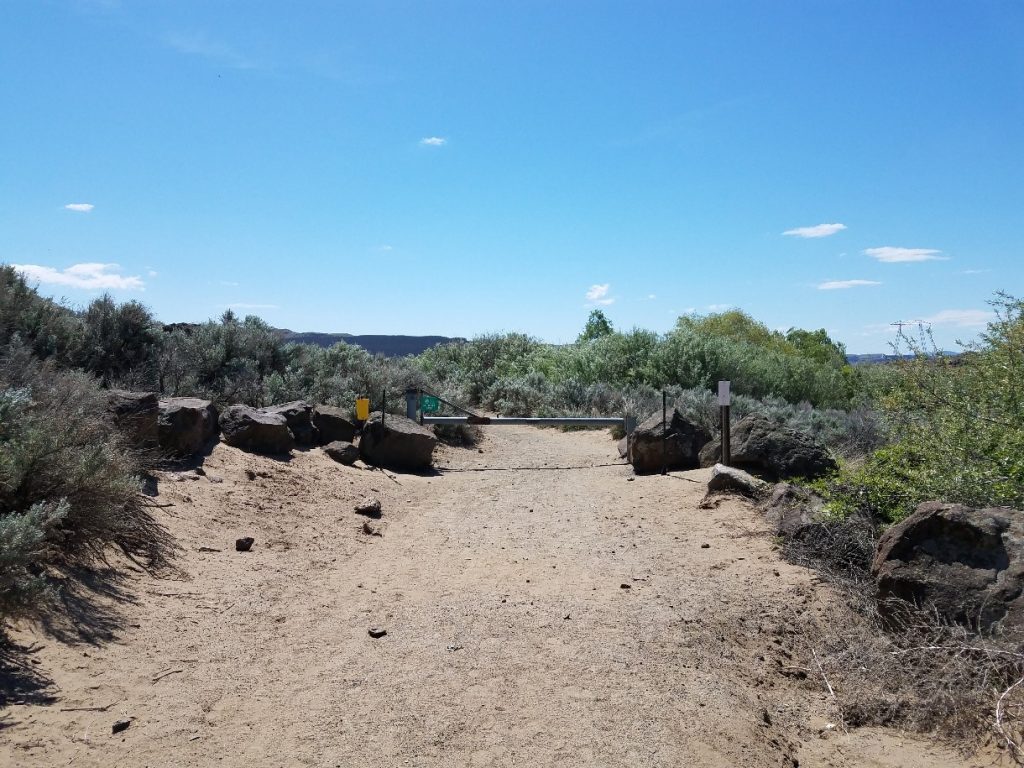 This entry area was the broadest part of the path, in many places the trail through the rocks and bushes was so narrow that only one person could utilize it, no side-by-side walking. If meeting an oncoming hiker, one or the other would need to stop and step off the path for passing.
About four miles in, looking across the valley, I was able to see that there was a footpath going up the “great blade of rock” on its north face approximately across from the first small plunge pool lake. Observing this possible footpath to the top, I left the established footpath toward the lakes and started cross country, down into the coulee and then up the other side. In that I was walking at a diagonal, I estimate that this part of the trip was at least two miles, maybe a bit more considering that once across the valley, I had to parallel the north side of the “blade” for some ways until I came to the upwards path.

This is what the “blade” looks like from the northern footpath that I took from the entry gate. My goal was to climb the blade and once on top, go to the western end (right side of frame) which overlooks the Columbia River. The flat area to the very left of the photo is what I was able to climb. The end to the right which overlooks the Columbia River was maybe another 200 feet higher. 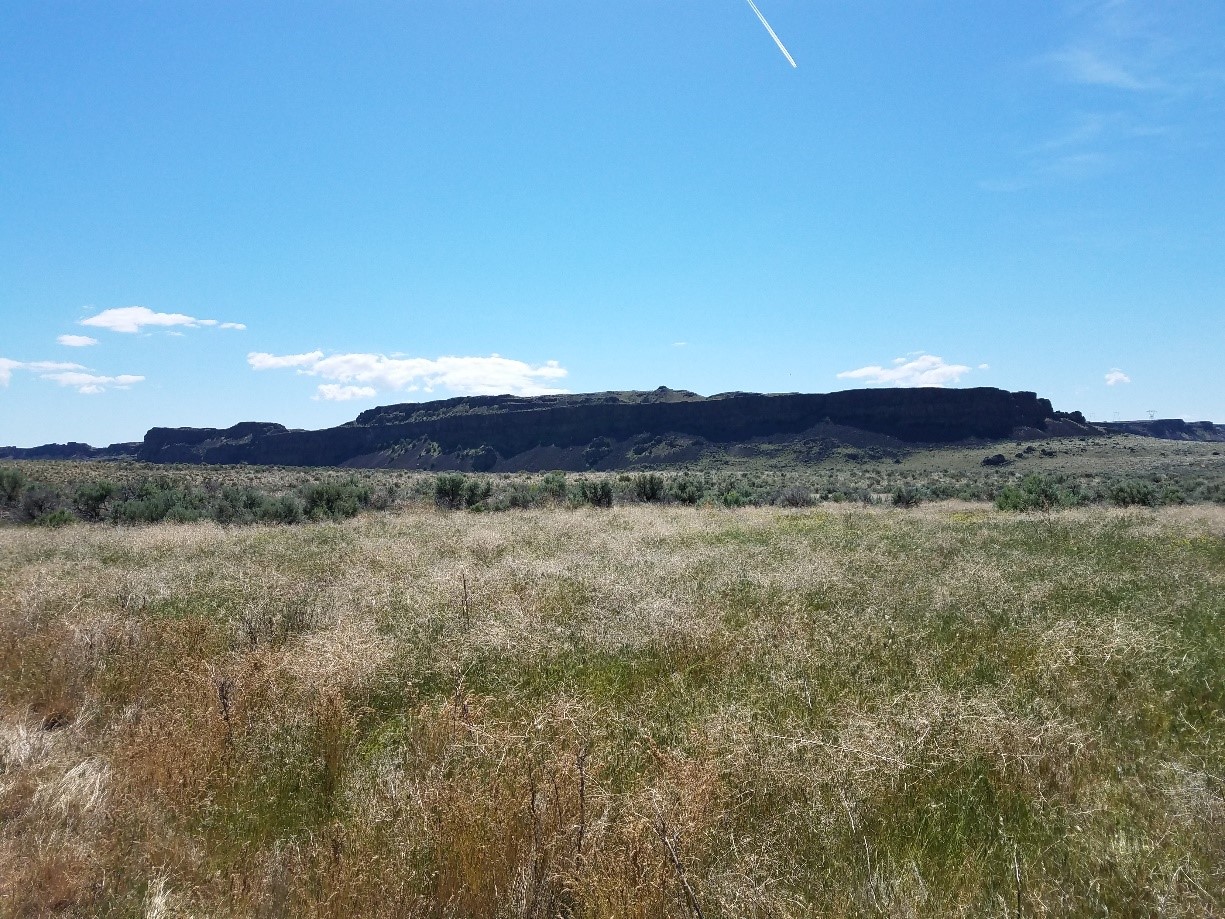 It cannot be discerned from the above picture but there is a deep valley between where I stood to take this picture and the “blade”. The below picture better illustrates the coulee valley. At the point of that photo, I was walking toward the lower flat area of the blade approximately in the center of the photo. It can be readily seen that the elevation to the right of the flat area is higher. What cannot be understood from the photo is the height difference, which as indicated earlier is about 200 feet. 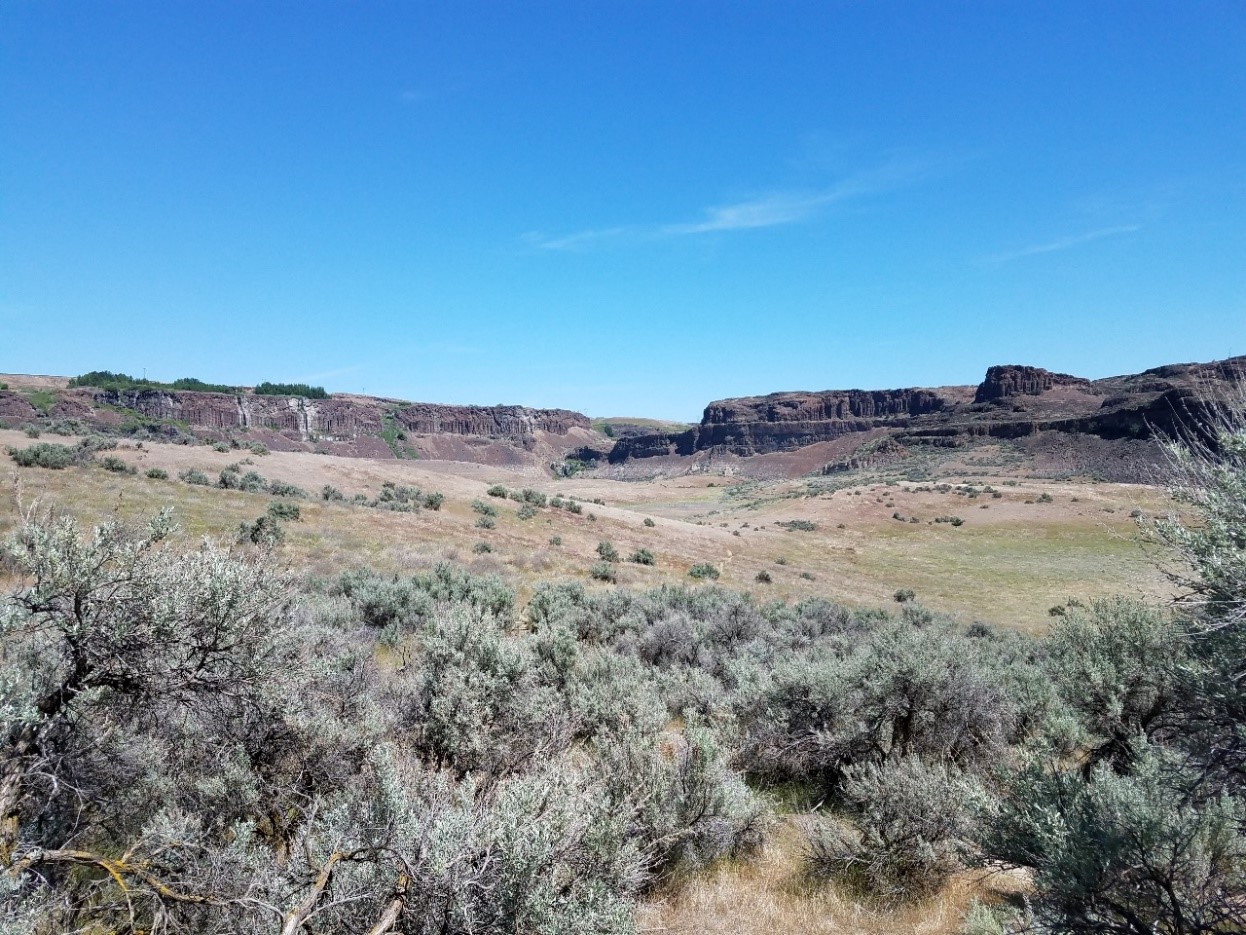 Below is the beginning of the upwards path that I was able to see from the north pathway of the Babcock Coulee side. The beginning was loose fractured rock fall-off from the basalt cliffs above. As I got higher, it became more rock like overlaid with dirt and gravel and in parts, more stable. This photo does not demonstrate the steepness of the trail but it does help illustrate the footing.

Where the large bush is located in the upper middle right of this photo is where the trail began to switch back and became steeper. There was more than one switchback; I estimate that the first part of the trail went up about 100 feet of elevation in about a half mile. 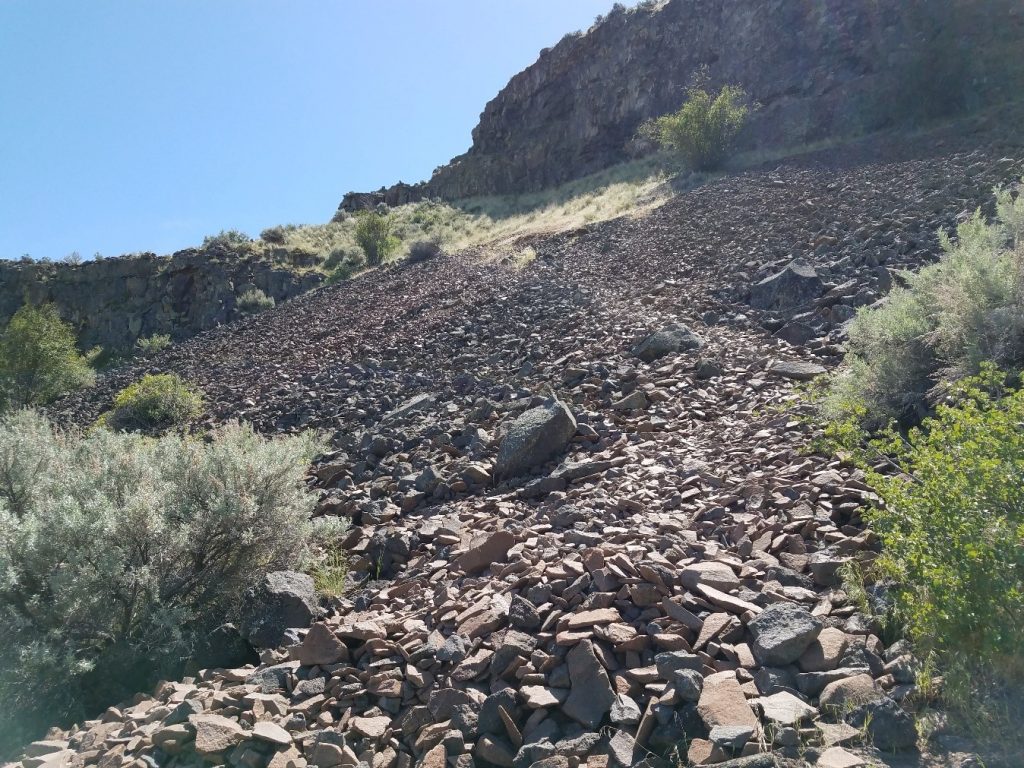 After flattening out a bit, the trail climbed approximately another 75-100 feet of elevation, where I stalled out for a rest. It was quite a climb but I made it to the flat area that can be seen on the center of the “valley” picture above. By the time that I got to the top of that flat area, I was exhausted so I took a rest and hydration break. Only another 200 feet or so of elevation was needed to get to the very top. Given the meandering of the trail this would require at least another mile of climb and then another mile plus to get to the end to overlook the Columbia River.

As I sat on the trail, just before the next part of the trail that was to be climbed, I began to question whether I had enough energy remaining to complete the hike and to return back to the parking area. The slope that was before me was just as steep as the one that I had just struggled to climb so it was a reasonable question.

Eight weeks earlier, I could barely walk around the block; stopping the cancer medications changed my energy level for the better. I began to feel so much better that I took on the challenge of the Scablands journey and this climb. What I did not understand, until this point, was that my energy reserves were essentially non-existent. It was premature of me to attempt this hike but I was so exultant about my returning energy that I let that overcome good sense.

While resting, six young hikers, five boys and one girl, came by and I was able to watch their travel up the slope and get an idea of how the path would go. They walked with the energy of youth and made it look easy. At the top of the slope, I could see them turn right, momentarily disappear from view behind a ridge, and then return clambering over a series of flat rocks that were two to three feet in height from each other, maybe a dozen in all.

Watching them, confirmed that today was not the day that I would make it to the end of the “blade”. I reluctantly decided that after completing my rest, I would head back.

On the way up, I got a good view of the valley floor and the lakes. 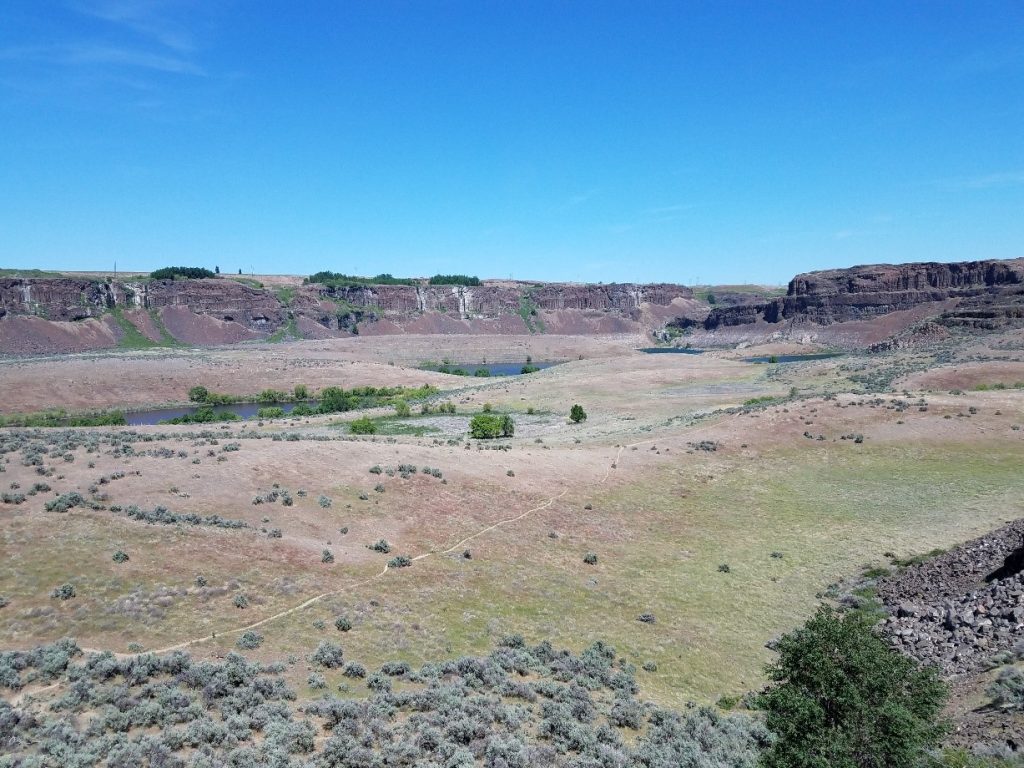 As I headed back, I knew that I had a six to seven mile return trip ahead of me but I tried not to think about it, I simply concentrated on my footing and one step at a time. Going down the steep part of the trail was more difficult than going up, in that if I stumbled I would take a head first tumble downslope.

On the steepest part of the trail, I simply had to sit down and scoot along as the shale covered slope was too slippery for my wobbly legs and energy state. As I scooted along, unbeknownst to me, my wallet came out of my back pocket. I became aware of it when a fellow hiker came up behind me to pass and said, “Here you go” and handed me my wallet. I was so surprised by this that it took me a minute to respond with a thank you. He was well past me when I finally croaked out my thank you.

Had he not come along right behind me and found it, I don’t know that I would have had the energy to go back and search for it, once I discovered it gone. The god of dumb old men smiled on me that day.

It seemed to take forever to cross the coulee valley and find the trail that I had left earlier. Once I found the trail, I still had about four miles to go. By then it was a trudge, one slow step at a time.

By the time I got within a mile of the parking area, I was beginning to question whether I was going to make it back, I was so exhausted. It was not smart of me to do what I had done but as indicated previously I was overcome with exultation because of my returning energy. This joyful feeling created a delusion that I could make the hike and the climb. This effort could have caused a major emergency as my body was not ready for such a hike.

It has been said that the hardest mile of any hike is the last mile. It was so for me this day. By the time I saw the parking lot and my beloved Oliver, I was nearly at energy’s end. But I made it.

During the hike I consumed five bottles of water, the last bottle when I was still a mile or so from the parking area. Once at my Oliver, I sat for about 30 minutes drinking water and eating some cheese and ham slices. By the end of that time, I felt refreshed enough to go look for a campsite for the night. I would have preferred to have stayed where I was parked but I decided not because of the steepness of this location.
I think that my total mileage for this day was at least 12 miles and probably closer to 14 miles. Not bad for a fat, 75 year old, who only a few weeks ago was released from chemo. 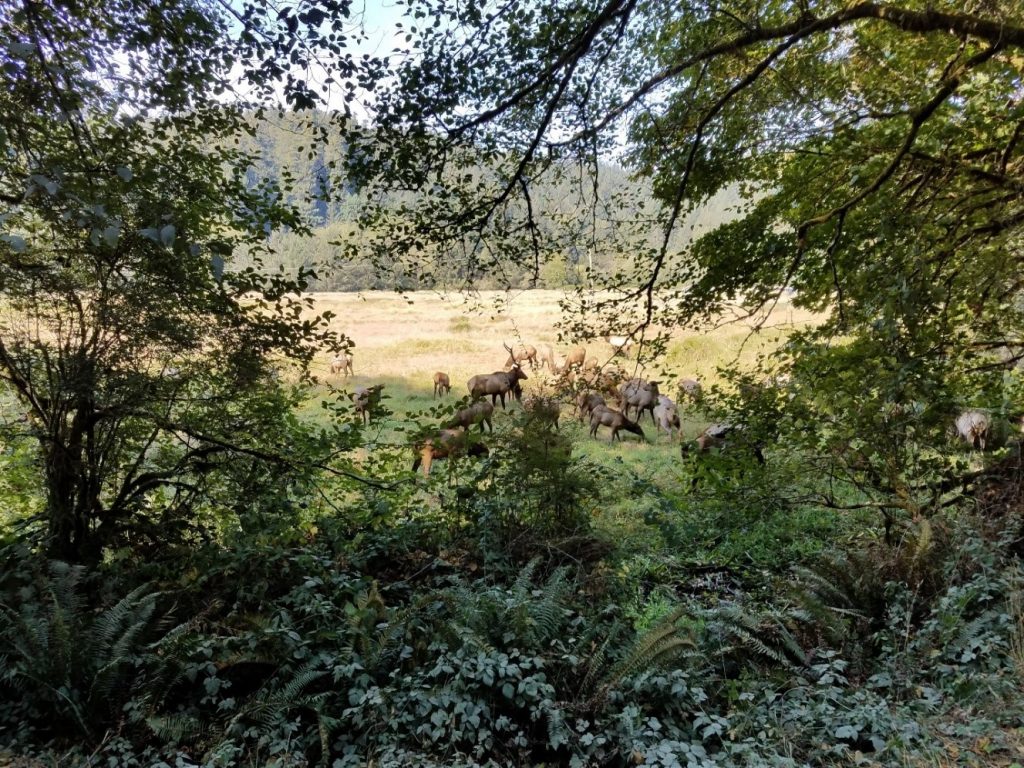