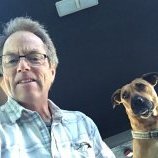 We had the exact same issue with our 3000w Xantrex inverter (hull #699); apparently ours came from the same mold as yours 😏 There must have been a batch of bad components when ours were assembled - na

Tip: If I remember correctly, I located the sticker using a mirror, then put the phone on selfie mode which put the screen facing up so I could tell if the lens was picking up the serial number.

I appreciate arguments on both sides of this issue but, that said, since picking up our E2 in December, I've had 13 issues involving 6 of the after market products.  Of these only two could be fully r